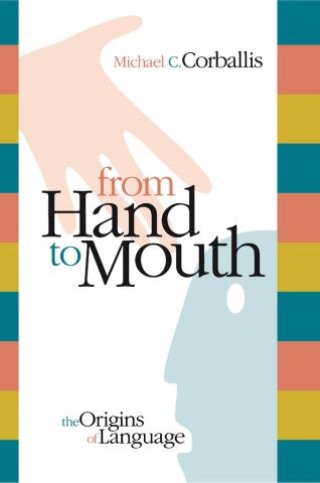 From Hand to Mouth

The Origins of Language

It is often said that speech is what distinguishes us from other animals. But are we all talk? What if language was bequeathed to us not by word of mouth, but as a hand-me-down?


The notion that language evolved not from animal cries but from manual and facial gestures--that, for most of human history, actions have spoken louder than words--has been around since Condillac. But never before has anyone developed a full-fledged theory of how, why, and with what effects language evolved from a gestural system to the spoken word. Marshaling far-flung evidence from anthropology, animal behavior, neurology, molecular biology, anatomy, linguistics, and evolutionary psychology, Michael Corballis makes the case that language developed, with the emergence of Homo sapiens, from primate gestures to a true signed language, complete with grammar and syntax and at best punctuated with grunts and other vocalizations. While vocal utterance played an increasingly important complementary role, autonomous speech did not appear until about 50,000 years ago--much later than generally believed.


Bringing in significant new evidence to bolster what has been a minority view, Corballis goes beyond earlier supporters of a gestural theory by suggesting why speech eventually (but not completely!) supplanted gesture. He then uses this milestone to account for the artistic explosion and demographic triumph of the particular group of Homo sapiens from whom we are descended. And he asserts that speech, like written language, was a cultural invention and not a biological fait accompli.


Writing with wit and eloquence, Corballis makes nimble reference to literature, mythology, natural history, sports, and contemporary politics as he explains in fascinating detail what we now know about such varied subjects as early hominid evolution, modern signed languages, and the causes of left-handedness. From Hand to Mouth will have scholars and laymen alike talking--and sometimes gesturing--for years to come.

Michael C. Corballis: Michael C. Corballis is Professor of Psychology and a member of the Research Center for Cognitive Science at the University of Auckland. He is the author of three books, including The Lopsided Ape, and coeditor of The Descent of Mind. His work has appeared in Science,Nature, Scientific American, and American Scientist.